Three leading carbon management companies have written to the WA Premier in a show of support for the Government’s proposed changes to Outback laws.

The changes, which include the establishment of a new type of lease – a rangelands lease – in the Outback, have the potential to create a brighter future for both people and nature.

Public support from the carbon industry has come at a critical time, with the proposed new laws governing land use in the Outback still up for discussion.

In the letter to the Premier, the heads of Australian Integrated Carbon, Climate Friendly and Carbon Neutral made a persuasive case for expanding the carbon farming market across the 90% of WA that is our Outback.

The letter stresses that the opportunity of carbon farming will remain closed to people in the Outback unless the WA Government's proposed changes to laws governing pastoral leases go ahead.

The three carbon companies are also behind advertisements in a number of WA newspapers - including the Countryman and Farm Weekly today, and the West Australian last week - that says there is at least a billion dollar benefit (according to the government’s own research) waiting to be tapped. 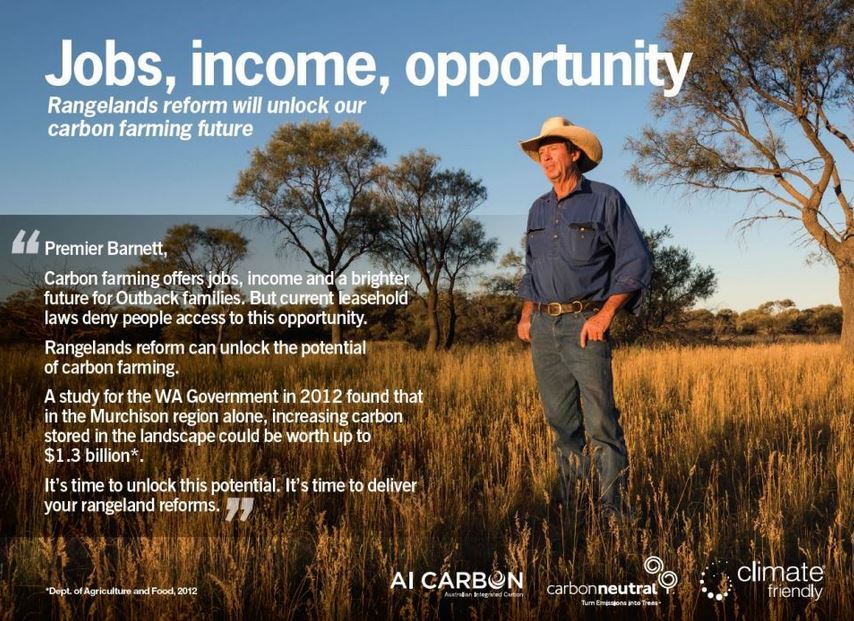 The potential for carbon farming is a clear demonstration of the need to modernise the state’s pastoral lease laws. The original Land Administration Act, with its roots in the Lands Act of 1933, could never have accounted for future opportunities such as the growth of the carbon sector.

In its present form, the Land Administration Act doesn’t provide the legislative framework to open up new industries like carbon.

There are real economic consequences if the government turns their back on reform. There is a $1.3 billion industry waiting in the Murchison alone, according to a government-commissioned report obtained under Freedom of Information laws.

Already, farmers in the Mid West are capitalising on the carbon sequestration market to rehabilitate lands degraded in the distant past.

Farmers on the NSW Central West are sitting on a $250 million federal government contract to store carbon as the country strives to meet its carbon reduction targets.

Meanwhile, across most of Western Australia's Outback - 90% of our state - pastoralists and other leaseholders have no access to the potentially lucrative and growing carbon market.

As has become abundantly clear in recent years, encouraging new industries in Outback WA is vital if we are to keep people on the land, managing it into the future.

Carbon farming is just one of the opportunities that hangs in the balance, reliant on the government’s reforms to Outback laws. Growing tourism investment, managing for conservation outcomes, and helping pastoralists return land to health all hinge on these vital reforms.

The carbon industry letter makes a strong, relevant and modern case in support of modernising our Outback laws.