The Conversation: Aboriginal fire management – part of the solution to destructive bushfires

Posted by Suzannah Macbeth on February 23, 2016

By David Bowman, University of Tasmania.

As destructive bushfires become more common there is increasing political discussion how we manage them sustainably. Inevitably these debates raise questions of the past ecological effects of Aboriginal fire usage.

There are two well-known narratives about Aboriginal fire use.

One, popularised by Tim Flannery, stresses the ecologically disruptive impact of Aboriginal fire use. This storyline argues that the megafauna extinctions that immediately followed human colonisation in the ice age resulted in a ramping up of fire activity. This then led to the spread of flammable vegetation which now fuels bushfires.

Another, promoted by Bill Gammage, suggests that the biodiverse landscapes that were colonised by the British were the direct product of skilful and sustained fire usage.

Such broad-brush accounts give the impression that the specific details of Aboriginal fire usage are well-known and can be generalised across the entire continent. Sadly this is not the case.

So rapid was the socio-ecological disruption of southern Australia that researchers have had to rely on historical sources, such as colonial texts and images, and tree rings, pollen and charcoal in lake sediments, to piece together how Aboriginal people burned the land.

Such records are open to interpretation and there remains vigorous debate about the degree to which Aboriginal people shaped landscapes. 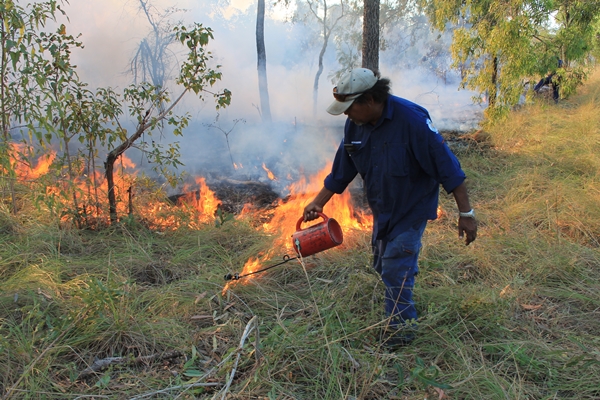 Piecing together the past

There are only a handful of detailed observational studies of the ecology of Aboriginal fire usage, and all from northern Australia, so there is dispute whether their findings can be extrapolated in the south. These studies demonstrate skilful use of fire that created fine-grained burn patterns, designed to promote food resources.

For instance, a prime motive for burning savannas is attracting kangaroos to nutrient-rich grass that sprouts after the fire. In the desert, Aboriginal patch burning increases the habitat for sand goannas.

In sum, there is mounting evidence that sustained Aboriginal fire use shaped many Australian landscapes by sharpening vegetation boundaries, maintaining open vegetation, and creating habitat for game species.

Such skilled burning reduced the extent and intensity of fires, allowing fire-sensitive plant communities - such as those in the Tasmanian wilderness - to persist in flammable landscapes.

The disruption of Aboriginal fire management has, for example, resulted in loss of the native cypress pine (Callitris intratropica) from savanna landscapes across northern Australia.

Restoring Aboriginal fire management to sustain wildlife and plants is sometimes a goal in conservation reserves. But this is challenging, because beyond some broad generalisations, the specific details of how Aboriginal people burned particular vegetation types are typically unknown.

Additionally, in many cases land clearing and introduction of non-native plants and animals have profoundly changed ecosystems, so it is not practical, or even desirable, to return to pre-settlement fire management.

Planned burning, to reduce fuel loads and decrease the severity and spread of wild fires, is a well-accepted fire management practice. A key justification for planned burning programs is that it emulates the burning practices undertaken by Aboriginal people.

However, there are key differences. Aboriginal people burn country by travelling on foot, meaning that they had much greater situational awareness of likely fire behaviour and impacts. Also, given they were present in the landscape 24/7, they could choose the timing and carefully influence the likely spread and ecological effects of fire.

By contrast, most planned burning programs have much less flexibility. They are typically constrained to the working week, specific seasons and weather conditions, and often rely on starting fires from the air to get sufficient landscape coverage in remote areas.

This style of fire management is a poor facsimile of Aboriginal fire. Fire agencies can only drop incendiaries under specific weather conditions in the middle of the day, when flying is safe. This results in bigger fires and consequently much coarser burn mosaics than was achieved by Aboriginal people burning their estates on foot.

In principle, well-trained field crews traversing the landscape can carefully use fire to create very localised fuel reduction, using specific weather windows (such as foggy conditions) and times of day (such as the evening) to maximise the likelihood that that fires remain under control and do not damage fire-sensitive habitats.

There is an opportunity to involve Aboriginal communities in fire management across Australia. This could sustain and rekindle an ancient tradition that was disrupted by European settlement.

Returning to, and managing, country has been shown to have measurable health benefits, an important consideration given the unacceptably poor state of Aboriginal health.

Climate change is compounding the bushfire problem. Even if we wanted to, returning to Aboriginal fire management in a rapidly warming world is no longer an option.

But adapting the principles of Aboriginal patch burning is an important potential strategy to improve fire management and biodiversity outcomes across Australia, be it restoring mosaics of small habitats in rural landscapes, or managing remote areas like the Western Tasmanian Wilderness, and large areas of outback Australia.

Well-trained people walking across country and burning it is a crucial approach in stemming destructive bushfires. There needs to be more investment in this ancient and effective pyrotechnology.

This article was originally published on The Conversation on 23 February 2016.