The West: Action needed now to save our rangelands

Posted by Suzannah Macbeth on 7 March 2018

This year is do or die for WA’s outback rangelands.

We almost lost Schools of the Air but we face another pressing challenge. A Statewide audit has found the health of the pastoral lands has been in free-fall for decades, so will the Government deliver lasting reform and usher in a new era of opportunity for our outback regions?

Our youngest son has departed for the city to complete high school. For my wife and me, it marks the end of 20 years of educating four boys at home through Port Hedland School of the Air. Each child’s departure is a loss of part of our world, difficult to explain to those not accustomed to living in remote places. Our home on Cheela Plains, a pastoral station near Paraburdoo, is a place we chose out of love for the life, land and livestock. 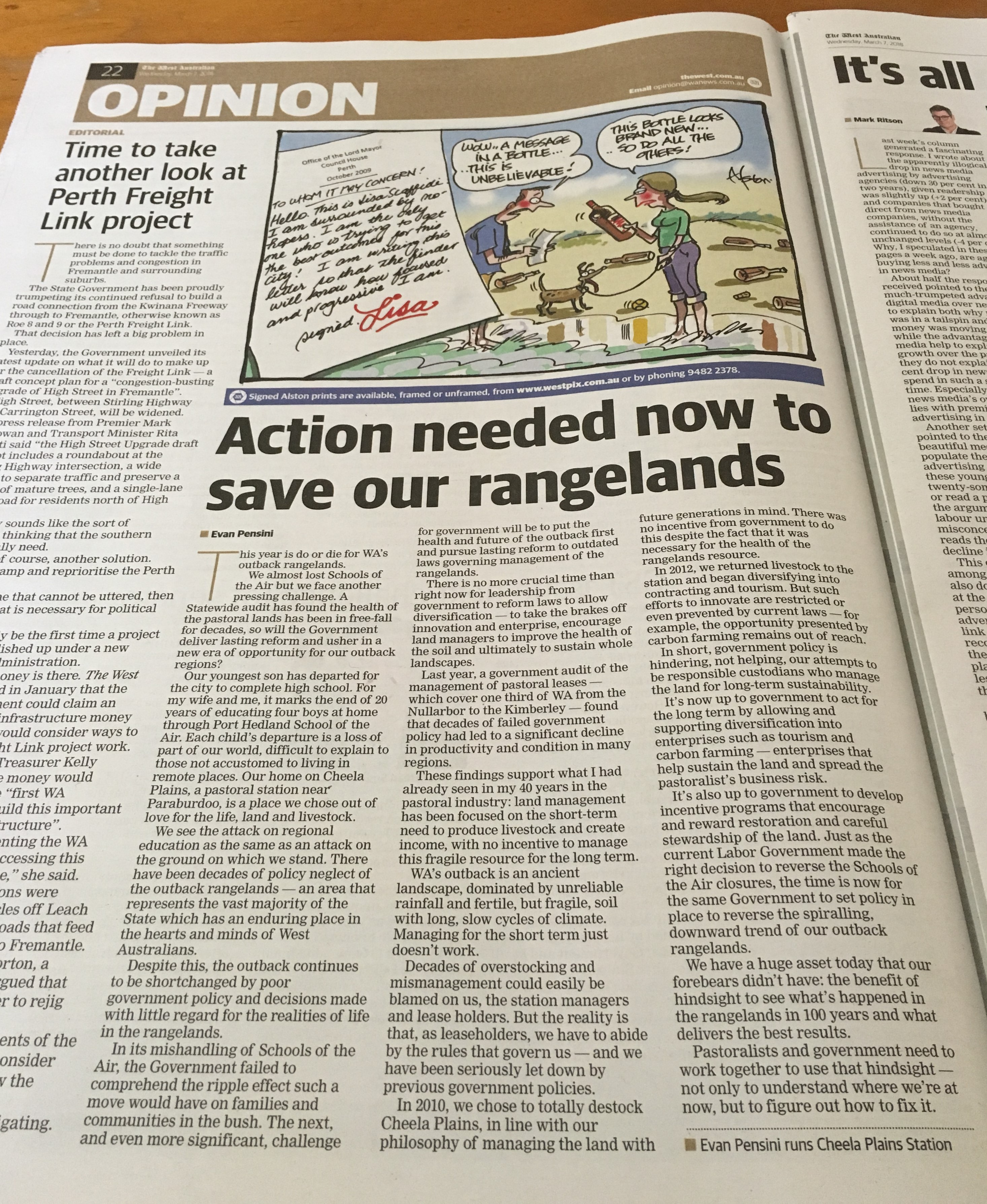 We see the latest attack on regional education as the same as an attack on the ground on which we stand. There have been many decades of policy neglect of the outback rangelands – an area that represents the vast majority of the State which has an enduring place in the hearts and minds of West Australians.

Despite this, the outback continues to be shortchanged by poor government policy and decisions made with little regard for the realities of life in the rangelands.

In its mishandling of Schools of the Air, the Government failed to comprehend the ripple effect such a move would have on families and communities in the bush. The next, and even more significant, challenge for government will be to put the health and future of the outback first and pursue lasting reform to outdated laws governing management of the rangelands.

There is no more crucial time than right now for leadership from government to reform laws to allow diversification – to take the brakes off innovation and enterprise, encourage land managers to improve the health of the soil and ultimately to sustain whole landscapes.

Last year, a government audit of the management of pastoral leases – which cover one third of WA from the Nullarbor to the Kimberley – found that decades of failed government policy had led to a significant decline in productivity and condition in many regions.

These findings support what I had already seen in my 40 years in the pastoral industry: land management has been focused on the short term need to produce livestock and create income, with no incentive to manage this fragile resource for the long term.

WA’s outback is an ancient landscape, dominated by unreliable rainfall and fertile, but fragile, soil with long, slow cycles of climate. Managing for the short term just doesn’t work.

Decades of overstocking and mismanagement could easily be blamed on us, the station managers and lease holders. But the reality is that, as leaseholders, we have to abide by the rules that govern us – and we have been seriously let down by previous government policies.

In 2010, we chose to totally destock Cheela Plains, in line with our philosophy of managing the land with future generations in mind. There was no incentive from government to do this despite the fact that it was necessary for the health of the rangelands resource.

In 2012, we returned livestock to the station and began diversifying into contracting and tourism. But such efforts to innovate are restricted or even prevented by current laws – for example, the opportunity presented by carbon farming remains out of reach.

In short, government policy is hindering, not helping, our attempts to be responsible custodians who manage the land for long term sustainability.

It’s now up to government to act for the long term by allowing and supporting diversification into enterprises such as tourism and carbon farming – enterprises that help sustain the land and spread the pastoralist’s business risk.

It’s also up to government to develop incentive programs that encourage and reward restoration and careful stewardship of the land. Just as the current Labor government made the right decision to reverse the Schools of the Air closures, the time is now for the same Government to set policy in place to reverse the spiralling, downward trend of our outback rangelands.

We have a huge asset today that our forebears didn’t have: the benefit of hindsight to see what’s happened in the rangelands over the last 100 years and what delivers the best results.

Pastoralists and government now need to work together to use that hindsight – not only to understand where we’re at now, but to figure out how to fix it.